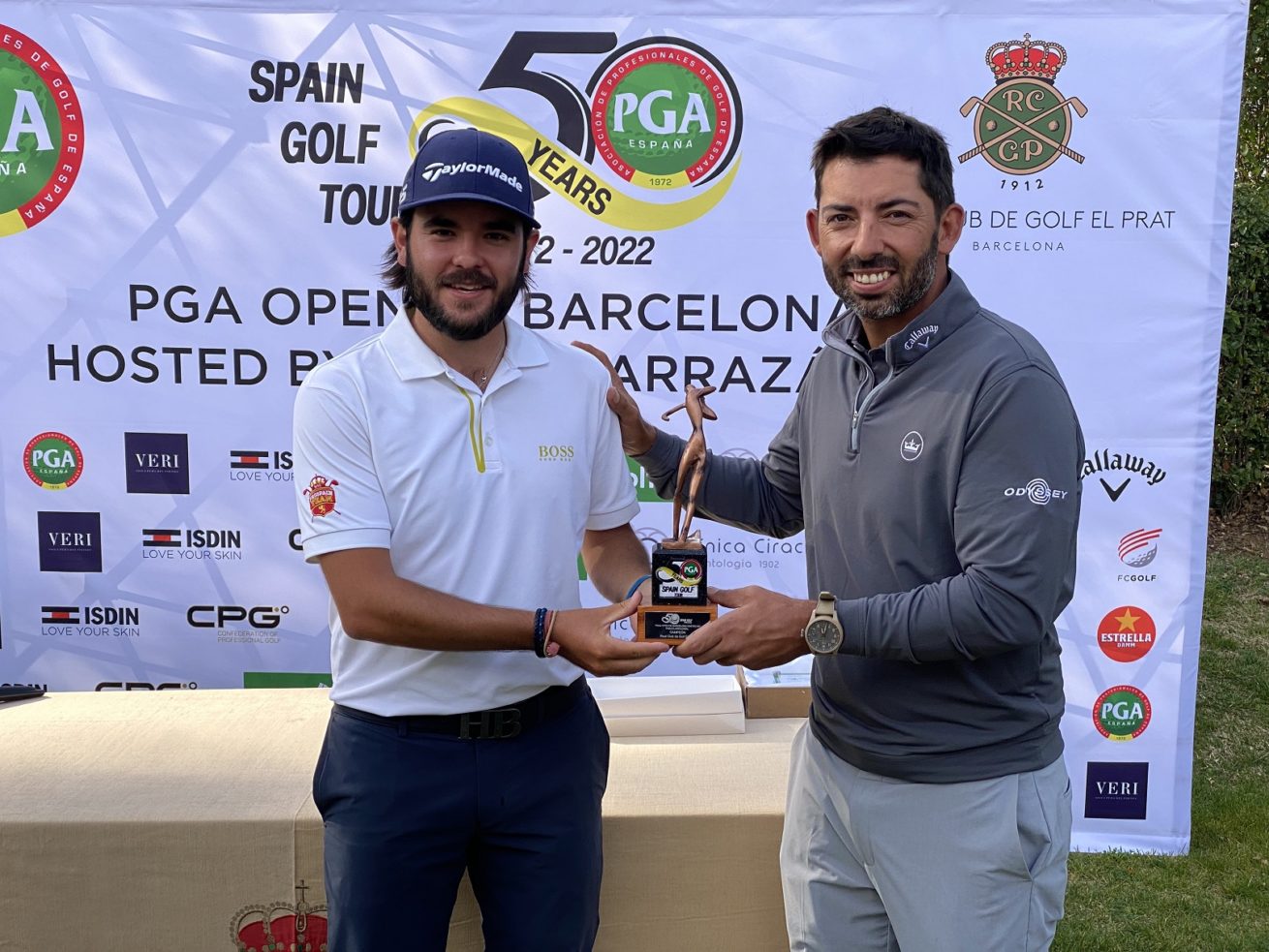 The Andalusian player Ángel Hidalgo continues to bring joy to Spanish golf after winning the PGA Open de Barcelona by Pablo Larrazábal on the second play-off hole against the local player Pep Anglès, who forced the playoff with a birdie on the 18th hole. Extraordinary round of 66 shots of Ángel, who made two bogeys on 6th and 13th, best round of the tournament. The player from Guadalmina redeemed himself after a second round of 77 shots. The strong wind and the harsh conditions of the greens were the cause of the high numbers of the almost 140 participants in the tournament: a record number of entries.

But, there is nothing impossible in golf. We have seen it at The Masters in Augusta with the game of Tiger Woods and we see it now at El Prat with Hidalgo who is ready for a place on the DP World Tour this year. After winning his full card for the Challenge Tour last season (two victories in the Alps Tour and one in the Challenge), Hidalgo has his eyes set on the DPWT. And what better way to take a giant step than conquering the first tournament of the Pro Spain Golf Tour 50th Anniversary, promoted by the PGA of Spain, which could not have had a better start, better course, better promoter or better winner.

Hidalgo did not have the best start (72 and 77), but the Andalusian got the best of himself in the last round: only two bogeys on the course on holes 6 and 13; and a heart-stopping finish with four birdies in the last five holes, signing a card of 66 to finish with 215 strokes (-1).

The victory  slipped away for Pep Anglès

Barcelona’s Pep Anglès, a DPWT player and one of the favourites for the victory, also had to overcome two rounds over par (74-73). The first nine holes were crucial with four birdies and a bogey; and in the second nine, birdies resisted him. After eight consecutive pars, the birdie on the 18th hole was highly celebrated and that allowed him to play in the playoff. Both players tied on the first hole and it was Hidalgo who prevailed with a great birdie on the second hole to write down his name among the winners of the Spanish PGA national circuit.

Pablo Larrazábal, one shot away from playoff

Bad luck for the Swedish Michael Lundberg, who after leading the tournament until the 15th hole, after his second consecutive birdie, signed two inconvenient bogeys (16 and 17) that made him lose ground. The birdie on the 18th was a consolation (72) to ensure third place tied with Pablo Larrazábal who has improved by the days in this tournament that he sponsors. As he said at the end of the second round, he knew that with red numbers he could be among the finalists. The last five holes of the tournament were very good (three birdies), but he was one more away from playing the play-off with the leaders.

Great job for the Catalan player and member of RCG El Prat, as well as by Álvaro Velasco, a club professional, who has also worked hard to make this tournament possible. As well as the RCG El Prat for their excellent work. The involvement of all the professionals has been essential to break the registration record and hold a big tournament at this start of the PGA Spain Tour 50th Anniversary circuit.