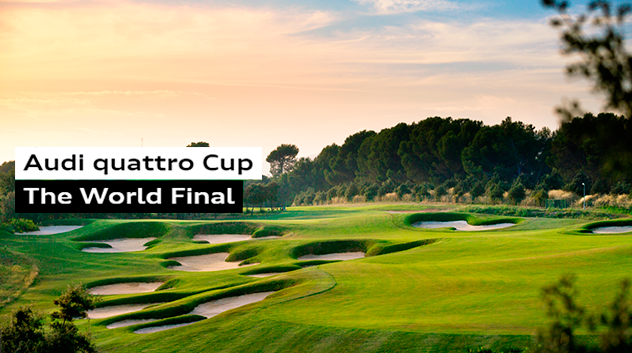 Next 7th , 8th and 9th of October the Real Club de Golf El Prat will have the pleasure to host the final of the Audi Quattro Cup, the largest amateur tournament series in the world, in its 26th edition.

This global competition that started in 1991 continues growing fascination. The Auddi Quattro Cup is currently held in 54 different countries and only during this year over 100.000 golferscompeted in teams of two across more than 800 tournaments in order to reach what is meant to be a frenetic final with some of the best amateur players in the planet.

The Audi Quattro Cup World final is the absolute highlight of the tournament year. Held on a different venue on every edition, it already took place in some of the finest golf courses in the world such as The Eblfry in England, Fancourt in South Adrica, the K Club in Ireland, Mission Hills in China, Jimeirah Golf Estates in Dubai and The Ocean Course  at Cabo del Sol in Mexico.

No wonder that the open course, where the Spanish open was played for the las time in 2015, with its par 72 and 6372 meters from white marks will be the perfect stage to challenge these skilled golfers on a two day competition.