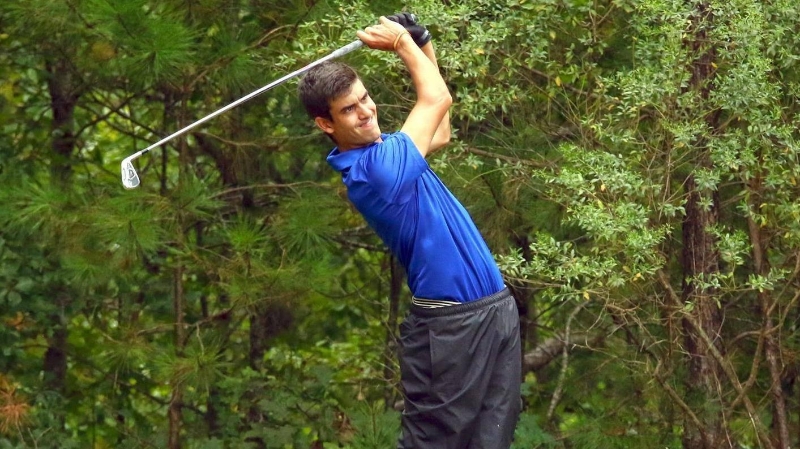 It was a banner day for one UWG men’s golf freshman as the Wolves opened their season with a first round 288 at the Full Moon Invitational at Timberline Golf Club in Calera, Alabama.

Freshman Lucas Mota wasted no time in making a name for himself as he posted a school record 64 in his first collegiate round, breaking Charlie Durman’s previous school record of 65 shot back at the 2013 Matt Dyas Invitational.

Mota, a native of Barcelona, Spain, began his day on the first hole and after two pars, rattled off four straight birdies, and added a fifth on the ninth hole to make the turn at five-under. By the par five 15th, Mota had added three more birdies to reach eight under. Mota slipped and made bogeys at 16 and 18 and sandwiched his ninth birdie in on the 17th to finish seven-under par. Mota has a four shot lead going into tomorrow’s final round.

Meanwhile, senior Samuel Jones was putting together a solid round of his own, finishing with a three-under score of 68 in his first round of the new season. Jones made six birdies on the day, including four on the front nine. Jones is tied for second place individually.

Blake Kollin opened his West Georgia career with a 76 on Monday, making just one birdie on the day, and putting him in a 25th place tie. The biggest setback for the Milton, Georgia native was a double bogey on the par five 11th hole.

The final score counted for head coach Todd Selders and the Wolves was from Reece Moore who finished with an 80. Ethan Jones carded an 81 in his first competitive round of the new season. Moore is in a 34th place tie while Jones sits in 36th.

Dan Benson, who is competing as an individual, shot a 75 in the first round of his senior season, and sits in a 20th place tie individually. Benson’s round was highlighted by an eagle three on the par five eighth hole to close out his round.

The Wolves are in third place after one round of play, trailing the host Montevallo by 11 strokes. Christian Brothers sits in second place after an opening round 286.