THE PERFECT MARIDAGE: GOLF AND GASTRONOMY. THE BROTHER TOWERS MEET IN THE II GASTRONOMIC DAY OF CHEFS OF PRESTIGE OF THE RC GOLF EL PRAT

THE PERFECT MARIDAGE: GOLF AND GASTRONOMY. THE BROTHER TOWERS MEET IN THE II GASTRONOMIC DAY OF CHEFS OF PRESTIGE OF THE RC GOLF EL PRAT

This Sunday May 7, the renowned chefs of Dos Cielos restaurant (a Michelin star) have made their perfect pairing with golf conquering the palates of the members of Real Club de Golf el Prat in the II Gastronomic Conference organized by the Club.

The menu they have prepared for this occasion has been as an aperitif tamarindo polviho and miso with winter tomatoes served with Cava Touch of rosé Perelada, Royal asparagus, smoked eel and roe, peas with Iberian ham sauce with Fransola wine, kid’s milk shoulder, garlic, anchovies and cherries with Tionio 2014 wine. A menu defined as “simple but with top quality products”.

The presentation of the event was given by the President of the Club, Federico Montllonch and Josep Maria Sanclimens recognized expert in gastronomy and member of 5 taula who has made a tour on the brilliant trajectory of the Torres brothers.

Twins, chefs, writers, presenters, businessmen… but, above all, they are Dos Cielos, which is what their grandmother Catalina called them as children, and the name of the restaurant that propelled them to the top of gastronomy. Brothers Javier and Sergio Torres discovered the art of cooking with Catalina, their grandmother, and learned from Josep Lladonosa.
Great chefs such as Santi Santamaria, Jean Louis Neichel, Alain Ducasse and Pedro Subijana welcomed them in their kitchens, where each brother developed his own technique separately. In 2002 they decided to join as chef-partners in El Rodat de Jávea. Six years later, in 2008, they would achieve one of their most precious dreams: to open their own restaurant, which they christened Dos Cielos. And they did it on the 24th floor of the Hotel Melià Barcelona Sky, then ME. In just two years, the Torres brothers won their first Michelin star. They have written books, presented audiovisual programmes and opened new restaurants. RCGP members have had the opportunity to enjoy the unique creations of the Torres brothers in a menu prepared exclusively for this occasion.
The Real Club de Golf El Prat in its mission to unite the sport of golf with Barcelona’s social life, has managed to fix the Gastronomic Conference in its annual social agenda. Last year it was Carles Gaig, who also had a Michelin star in his career, who delighted the club’s members. And so, year after year and event after event, the feeling of club membership is booming in that it is considered one of the clubs with the longest standing in Spain and the European continent.

The Real Club de Golf El Prat celebrated one hundred years of history since its origins in Pedralbes in 1912.
In the sports area it is the most awarded club in Europe and has numerous professionals active in the different national and European circuits. A level of excellence ratified by the ten times in which it has organized and hosted the Open de España de golf.
Throughout history, the Real Club de Golf El Prat has been the scene of tournaments of the European professional circuit, totaling among its members more than 250 national and international championships.

In addition, he has been a youthful pool of regular national team players and active professional players on the various national and European circuits. Proof of the recognition of this trajectory the Club has received in 2013 the Honorable Mention of the 125 best Clubs of Members of the World for Platinum Clubs of the World and the Golden Plaque to the Spanish Sports Merit and, in 2015 the Olympic Plaque of the Spanish Olympic Committee.

It is currently located on the Bonvilar estate, between Terrassa and Sabadell and only 25 minutes from Barcelona. It has a natural environment of 210 hectares, in addition to the 13,000 hectares of the Natural Park of Sant Llorenç del Munt i l’ Obac that surround the facilities.

In this idyllic landscape, Greg Norman, one of the great golf professionals, designed 45 holes with a unique approach that fuses comfort, adapting the course to each level and style of play, with beauty, by harmoniously integrating the seven rounds with nature. In fact, respect for the environment in all its facets is one of the club’s basic guidelines, which has earned it ISO 14001 in recognition of its commitment to sustainability.

More than a hundred years of intense trajectory support the prestige of Real Club de Golf El Prat, consolidated as one of the best golf courses in the international scene. 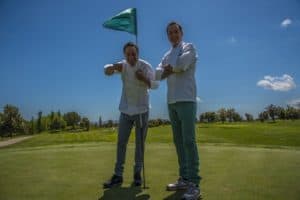